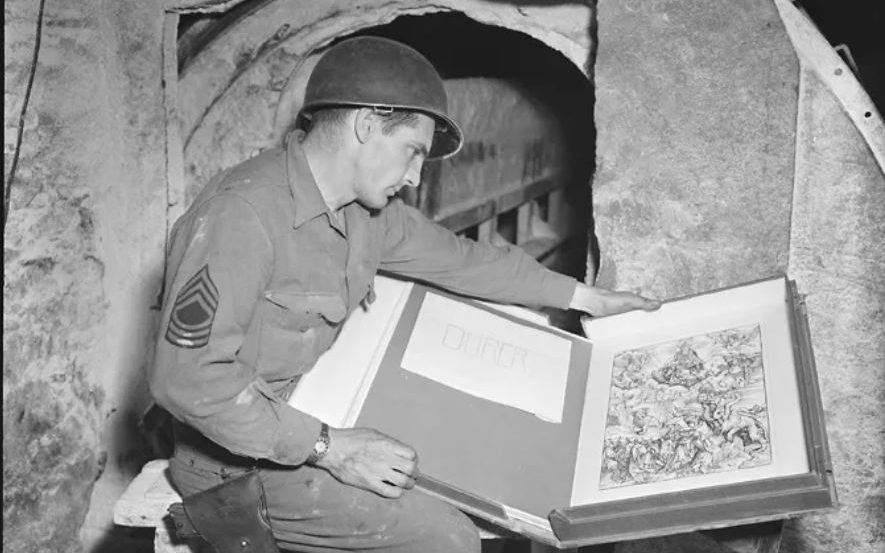 The Claims Conference/WJRO work with governments and relevant Jewish communities to ensure a just, fair, and simple process for claims for looted art and other cultural property in each country and encourage the development of provenance research. Examples of current activities include:

The number of Jewish museums that have done provenance research on their collections has remained small. In order to jumpstart adherence by the member institutions of the Association of European Jewish Museums-AEJM to its 2006 Resolution, discussions between representatives of the AEJM and the Claims Conference/WJRO have centered on creation of a “International Database of Lost and Found Ceremonial Objects”.  The initial phase of the project was carried out from February to June 2021 with support from the Claims Conference/WJRO, and the next phase focuses on five Jewish museums that were looted by the Nazis or their allies – the Jewish museums of Amsterdam, Athens, Budapest, Prague, and Vienna – including what objects were restituted and what objects are known to be elsewhere or missing.  The presentation will be done through the Jewish Digital Cultural Recovery Project.

Co-founded by the Claims Conference and the Commission for Art Recovery, the Jewish Digital Cultural Recovery Project Foundation (JDCRP Stiftung) completed its initial pilot project co-funded by the European Union, The Fate of the Adolphe Schloss Collection as of July 31, 2021.

Further testing of the feasibility of creating a comprehensive database of Jewish-owned objects of art looted by the National Socialists and their allies between 1933 and 1945 is expected to continue through populating the JDCRP Database with mass data, beginning with that from the Database of Art Objects at the Jeu de Paume (ERR Database) and potentially such sources as the Nazi tax records in regard to cultural property held by the Brandenburg Archives and the shipping records kept at the Bremen Maritime Museum. More detailed presentation is expected to be made of individual collections.

Continuing research on libraries looted in Belgium is showing that, similar to French libraries, many of the books seized in Belgium are in Minsk. It is hoped that cooperation with relevant institutions in Belarus will continue.

The Claims Conference/WJRO sponsors research on Nazi seizures of libraries in Belgium. The first part of the research has now been completed, including lists of original individual and institutional owners. The exceptionally complicated detective work has been posted at https://www.errproject.org/looted_libraries_be.php,  The second part, which focuses on the weak postwar restitution of books in Belgium, is expected to be completed later in 2021/22.

At the request of the Claims Conference/WJRO research has been conducted on cultural property taken by Bulgaria from Jews in Macedonia, Thrace, Pirot and Bulgaria proper. Contact has been initiated with the government of Bulgaria and with the Bulgarian Jewish Community in regard to next steps.

At the request of the Claims Conference/WJRO, an analysis of the archival records, specifically the Ponova and KOMZA records of what was taken and how the distribution was conducted after the war, has been carried out.

The information concerning the results of provenance research by the Gurlitt Provenance Research project has appeared in different places. The Claims Conference/WJRO has therefore brought together all the online available information (“green” cases, “yellow” cases, “red” cases) so as to allow searches for specific paintings with references in various websites.

The Claims Conference/WJRO has also compiled a statistical review of the research results by the Taskforce Schwabinger Kunstfund as well as by the Gurlitt Provenance Research Project as part of the German Lost Art Foundation. The graphs clearly exemplify that an organized and online accessible overview of all artworks that are part of the Gurlitt trove is still missing, including for artworks that are classified as “degenerate art” as well as for artworks with provenance gaps between 1933 and 1945.

As part of the preparation of the joint agreement between the Government of the Grand-Duchy of Luxembourg and the Consistoire Israélite de Luxembourg (cosigned by the WJRO and the Fondation luxembourgeoise pour la Mémoire de la Shoah), the Claims Conference/WJRO reviewed the text and made suggestions for additions to the section on cultural property that were then adopted.

It is expected that provenance research will now be carried out by scholars from the University of Luxembourg with the relevant holding institutions.

In articles (e.g., in the Dutch newspaper NRC Handelsblad), in speeches at conferences, and otherwise, the Claims Conference-WJRO had criticized changes that had been made in Dutch restitution policy during the past decade.

Partly in response to this criticism, the Minister of Education, Culture, and Science called for a reassessment during 2020 of Netherlands policy. Meetings were held  with the Committee for the Evaluation of the Restitution Policy for Cultural Heritage Objects from the Second World War (Kohnstamm Committee), which on December 7, 2020, published its report.  The report basically includes and agrees with all the recommendations that the Claims Conference/WJRO made to the Committee, including establishment of a Help Desk to assist claimants and how to handle unclaimed “heirless” artworks. The Minister of Education, Culture, and Science has since recommended concrete steps to be taken in regard to restitution policies that are not only in accordance with the report but even go beyond it. In the late spring the Minister established a series of progressive policies and increased funding in provenance research. The envisioned provenance research needs to address the recovery of cultural goods from other countries, for example those paintings looted from Dutch Jews that went through the Nazi art market to Poland.

As of January 1, 2022, the National Office for Cultural Heritage of the Ministry of Education, Culture and Science opened an office for looted art questions for both the public and specialists in the field that reconstitutes the Origins Unknown Agency, advises claimants as well as museums on acquisitions and oversees new research on the NK Collection and programs to educate new provenance researchers.  It is expected to play a more active role in the JDCRP Foundation and to address issues of artworks looted in the Netherlands that are now in other countries.

The Gdansk State Museum organized a conference in June 2020 to examine the origins of art collections in Polish museums, at which Patricia Grimsted presented her research on a van Goyen painting seized by the Nazis from the Dutch art dealer Jacques Goudstikker, the only presentation concerning art currently in Poland that was looted from Jews in countries outside of Poland. The original version of Dr. Grimsted’s article may be seen here.

On 18 February 2021, at the request of the Jewish Community of Cluj, the WJRO stopped the auction of 21 manuscripts belonging to Jewish communities (primarily pinkasim of burial societies) in Romania and what was greater Hungary (in what is now Hungary, Slovakia, Romania, and Ukraine) at a New York City based auction house specializing in Judaica. 17 out of the 21 manuscripts had been consigned by a Manhattan collector of burial society records. The Federation of Jewish Communities in the Slovak Republic brought the attention of U.S. Federal Authorities to the matter as well. The manuscripts were subsequently confiscated by the FBI.

The WJRO has been moving towards a policy that encourages the return of such Jewish communal manuscripts and other objects that are in private hands to the communities from which they were taken, but with the recognition that the scanning of such community registers and making the information in them generally available is of great importance to Jewish historical and genealogical research and that there is a need to educate auction houses and dealers handling Judaica in this regard.

The Claims Conference/WJRO provides the following concerning information on listings by the Ministry of Culture of the Russian Federation as a service to provenance researchers.

The Ministry of Culture of the Russian Federation on its website entitled “Cultural Values-Victims of War” in a section on “Moved Cultural Values” has published a partial list of paintings, drawings, graphics, archaeological objects, musical instruments and other categories of objects that were brought into Russia by the Soviet Trophy Brigades at the end of World War II.

So far, objects listed have overwhelmingly been objects taken from museums and repositories in Germany and other states that were enemies of the Soviet Union during the war, which under Russian legislation are not subject to restitution. So far as is known, specialists in Germany trying to track what was taken from the various German museums after the war that still is in Moscow and elsewhere in the former Soviet Union are almost the only ones outside of Russia following the listings. Since much of what the Soviet Trophy Brigades took included many objects looted by the Nazis and their allies from Jews and others of their victims, it is not impossible, however, that some such objects may be in the listings, although in all likelihood only by accident. Although parts of the website are in German, English, and French, the catalog of the objects is exclusively in Russian. To make the listing better known to non-Russian speakers, the Claims Conference/WJRO presents on its website a translation into English by Yagna Yass-Alston of all the listings of paintings (paintings 2016, paintings 2018) as well as those graphics (works on paper 2016) that are by known artists.

At the request of the Claims Conference/WJRO, research that had begun under the TranscultAA Project (Transfer of Cultural Objects in the Alpe Adria Region in the 20th Century), has been continued, specifically on what was taken from the Jewish community of Maribor.

At the beginning of October 2020, the Claims Conference/WJRO raised with the Federal Department of Foreign Affairs and the Contact Bureau on Looted Art of the Federal Office of Culture of Switzerland – and through them with the State Secretariat for International Finance – concern that under the Swiss Escheat Law enacted in 2015, as of the end of 2020 banks are able to give over works of art and other valuables that are in their safety deposit vaults to the heirs of account-holders and to sell or otherwise dispose of items that are unclaimed, with the proceeds going to the Federal government. The Swiss Banks Settlement did not go into the question of looted artworks, and it is likely that works that had been looted from Jews and were deposited by Nazis or by persons collaborating with them, as well as by Jews who then perished, are in the relevant safety deposit boxes. The above parts of the Swiss federal government are investigating how to handle this complex situation and have promised to report to the Claims Conference/WJRO.

The Claims Conference/WJRO compiled and published a memorandum regarding the history of U.S. restitution policies in regard to the Holocaust to counter historical errors in an amicus curiae brief submitted by the U.S. Solicitor General to the U.S. Supreme Court in the Philipp v. Federal Republic of Germany case (Welfenschatz-Guelph Treasure case.

The Claims Conference/WJRO continues to be represented on the Scientific Advisory Board of the European Holocaust Research Infrastructure (EHRI) as EHRI becomes a permanent entity under the European Union. EHRI has promised to focus more on archives concerning assets generally and particularly regarding cultural property.

The[WAF2]  Claims Conference/WJRO is represented in the Monitoring Access to Holocaust-Related Archives project of the International Holocaust Remembrance Alliance (IHRA) that is currently in discussion with the heads of both state and private archives throughout the European Union, including regarding property archives.